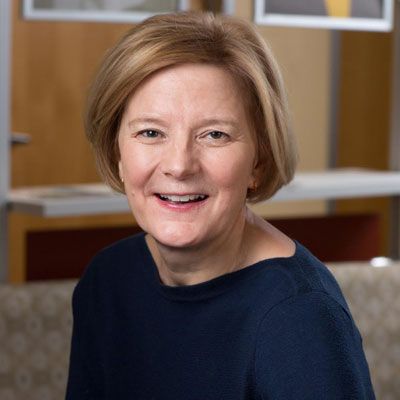 Helen Boaden spent 34 years at the BBC, starting at BBC Radio Leeds and ending on the BBC Executive Board. She was an award winning radio reporter and Editor, Controller of Radio 4, Director of BBC News and Director of BBC Radio. She led the team which created the BBC’s multi media newsroom, the largest in the democratic world. She was also Exec lead on the innovation project, myBBC, which delivered the digital tools for personalised content.

She was a Fellow at the Shorenstein Center for Media, Politics and Public Policy at Harvard University in Spring 2017. She speaks on the Windsor Leadership Programme and contributes to a range of media and journalism events at home and abroad. She recently gave evidence to the British Parliamentary investigation into fake news and misinformation.

She is Chair of the Stephen Joseph Theatre in Yorkshire and sits on the Council of the Royal Academy of Art. RTÉ has asked her to review its orchestra provision and her report is expected in February.

All Sessions By Helen Boaden

My Story : A Broadcasting Career, Insights to the BBC and Radio's Future